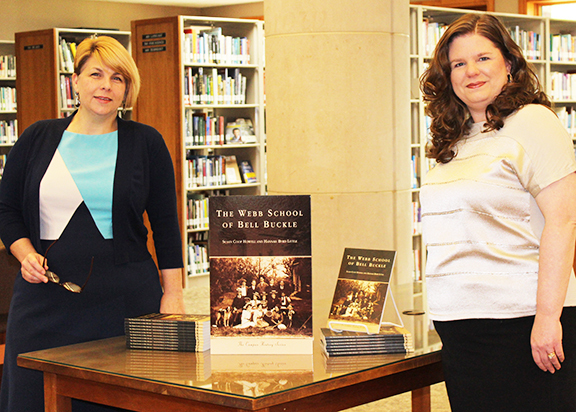 The Webb School has a rich and storied past with tenets that have survived and remain as relevant today as when the school was founded in 1870. Webb will officially begin its 150th anniversary celebration on Aug.12, the first day of school. Capturing the story of Webb in honor of the anniversary isa commemorative pictorial book, The Webb School of Bell Buckle, by authors, Susan Coop Howell and Hannah Byrd Little. Howell is Webb's archivist, and Little is library director.

Deeply-rooted traditions and reverently held principles are at the core of Webb's foundation, and gathering just the right photos to tell the story spanning 150 years was no small task.

"There were so many unique pictures and documents that could be used, that I quickly realized this part of the project was going to be a challenge," said Howell.

"With so much archival material and information, I asked myself 'how are we going to narrow this down to 128 pages and still convey the Webb story to the reader?'" Howell was not only concerned about honing the possible archival pieces from such a large collection, but also compiling them in a cohesive way to tell the story of The Webb School. "There were many more pictures that we could have chosen, but we did have a limit as to how many could be used."

Little noted that after the initial assessment of the project, they gathered photographs they were confident would be included in the book. Early on, the pair faced another challenge.

"We struggled in the planning and brainstorming phase," said Little. "Should we organize the book by themes, or should we organize chronologically? In the end, we decided that telling the story of the school in time order was the best method."

"It is organized somewhat by eras, with the two largest ones being that of Sawney and John Webb, and Sawney's son, William R. "Son Will" Webb Jr.," Howell noted. "In addition to that, there are a couple of the eras which show progression of growth for Webb. Those include Webb adding more dormitories and buildings on campus, and then also reintroducing female students, both day and boarding, back into the student population, along with international students."

To facilitate the project, Little explained that they designed a system to work together electronically in a shared database. "We started with a general table of contents comprised of four broad sections. In the database, under the section headings, we had an entry for every photograph and wrote captions for each of the images. This system helped us keep a page and photograph count as we worked within our publisher's parameters."

As they evaluated each of the photos for reproduction interest and quality, both authors focused on the historical and cultural value in the storytelling. "Some specific photos were selected for the book because they were fundamental to the school's beginning. Certain pictures were necessary for telling some of the more significant facts about Webb, some of which may not be known to the reader. They also show what life was like for a Webb student beginning in the early days, whether they were in Culleoka or Bell Buckle, and leading up to the 21st century," Howell explained. "Archival photos can tell you quite a bit even when there are no descriptions," the archivist added. "For instance, the clothing style that is shown in a photo will give you a general idea of the era of time in which the picture was taken. Items that may be seen in the picture will give you clues as to what was taking place in the picture, whether it was a family portrait, a formal occasion, a sports activity, or some typeof ceremony."

As an example, Little explained, "The cover photo of an 1897 tennis team not only indicated that the school is coed, but also male and female students were involved in sports. This same photo included several children of the school's founders, and there is a dog. This dog identified as the founder's dog, Spica, let me know that being a dog-friendly campus is nothing new." She added, "The facial expressions, the style of clothing, the activities in the pictures, all tell stories of different eras and traditions throughout the school's history."

As the book production and editing continued, dealing with the project's deadlines, both the publisher's and their self-imposed deadlines, had to be managed during the school year, when everyday tasks and responsibilities had to be completed. The deadlines and volume of work were balanced as each author watched the history unfold. "Getting to know the stories of the people and groups we featured was interesting," Little remarked. "As an example, John James Tigert, Tennessee's first Rhodes Scholar, was a Webb graduate who went on to Vanderbilt University and was an athlete in many sports including basketball and football."

Howell found that the overall publishing process was very interesting. "... after working with the editors, and watching the book come together little by little, and then finally seeing the finished product was amazing. We had seen the rough draft multiple times, so when the finished copy arrived, I was so excited! I think it is really neat and am excited to be able to add it to my list of accomplishments. It was not something I ever envisioned myself being a part of, but I am glad that I had this wonderful opportunity. I am privileged to be able to be a part of making Webb's 150th Anniversary a great celebration."

"It is exciting to see your name on a book for the first time as an author, and the experience made me want to write even more," Little remarked. "This summer, I will work on industry writing, but I may also work on a fiction project I started two years ago."

The Webb School of Bell Buckle is available at a cost of $21.99. online through Arcadia Publishing, Amazon, Barnes & Noble, Target and local shops.