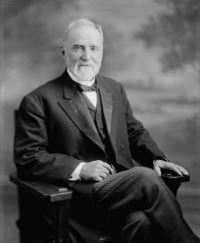 The Webb School was founded in 1870 at Culleoka, Maury County, Tenn., by William Robert Webb, known affectionately to thousands as "Old Sawney."

"Sawney" Webb made an indelible mark on many areas of life. He was active in educational, political, religious, social, and community affairs. Although he never ran for public office, he was elected to the United States Senate in 1912 to fill out an unexpired term. Of course, his greatest contribution was as an educator. The story of his work with young people makes a full chapter in the annals of American education. Under Sawney's leadership, Webb admitted female, Native American, and Asian-American students. Sawney was principal of Webb from its founding until his death in 1926.

Sawney's brother, John Maurice Webb, joined the school in 1873 and served as co-principal until his death in 1916. John was a scholar of the first rank. Modest and retiring, he did not engage in the public activities of his day. However, many young men caught a gleam out of "Old Jack's" eye that inspired them to plan a public career. John's broad and accurate scholarship was always a source of wonder to his students. His gentle and persuasive manner was an effective counterpart to the stern discipline practiced by his brother. The united efforts of these men created the unique Webb tradition and made Webb School one of America's most distinguished secondary schools.